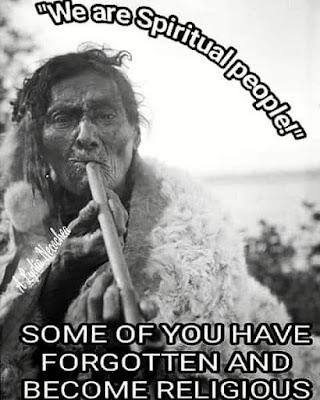 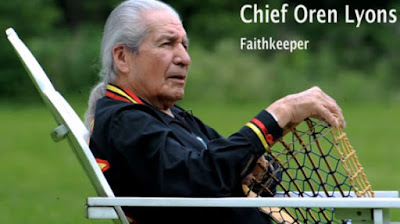 "The Natural Law is a spiritual law. Its powers are both light and dark." There are some characteristics that are evident in the system which the Creator made. He made balance, harmony, and polarity. In other words, every (+) plus has a (-) minus. Every positive has a negative; every up has a down; every problem has a solution. The Spiritual Law is the same - it has light and dark. Both are good, so both need to be honored. Lessons can be learned on both sides.  Great Spirit, teach me the powers of the Natural Laws.   -- Oren R. Lyons, Spokesman Traditional Circle of Elders
Posted by Glenn Schiffman
Email ThisBlogThis!Share to TwitterShare to FacebookShare to Pinterest 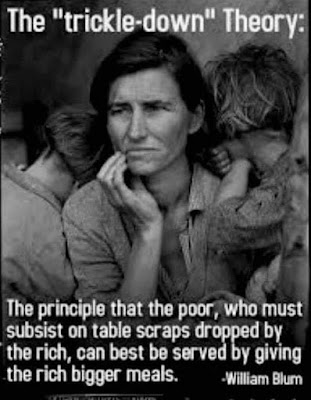 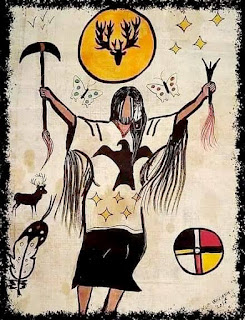 Cultures the world have passed down stories about stars and creation. Lakota people had regionally based beliefs called Star Knowledge. One of these stories tells how the stars give a spirit to a Lakota person at birth. When they die, that spirit returns to the sky and travels though the Milky Way.

According to Lakota tradition, every Lakota baby that is born is given a wanagi. A wanagi is like a spirit from a star. We live our lives here on this earth with that wanagi. Then when we die, that wanagi leaves our body and it goes to the cup of the Big Dipper.

The cup has seven stars. Four of them make the dipper part and three of make the handle. Those four stars that make the cup are called the carriers. When the wanagi leaves a person who had died, those four stars, they carry this blanket between them and on that blanket is this wanagi.

In Lakota, you hear the phrase mitakuye oyasin, which means all my relatives, all my relations. A lot of times, we westerners think of that meaning all my cousins and all my aunts and uncles and we think of humans, but when Lakotas say this mitakuye oyasin, it means all these relatives of all the nations, not just the human nations. The star nation is one and that's this idea of relatives throughout the universe. So, all Lakotas are related to stars. All the research now is we are exchanging molecules all the time with our environment. This is this idea that it's these species are not finite. One specie versus another specie is that the plants, the animals, all other people, we're exchanging molecules with all of these living beings and that fits into the Lakota cosmology perfectly. That's not foreign. It wouldn't be strange to traditional Lakotas from 150 years ago to have been old that. They'd say, well, yeah. That's mitakuye oyasin, we're all related.